Let’s say this is not an essay, but a fictional story. I was very pleased, that good friend of mine, who happens to be a catholic monk and Jungian psychoanalyst, accepted to be the god-father of my son. Since he lives somewhat remote on the country side – you guessed it, his home is a monastery – I picked him up on the day of the confirmation. I wanted also to show my appreciation. During the car ride, we discussed the contribution of women in psychoanalytic realm particularly C.G. Jung and women. I tested a little bit my upcoming article regarding Sabina Spielrein, and from there the conversation wandered to the subject Toni Wolff and Female Archetypes.  We agreed, that she had written the most concise essay on the Anima,  besides the two essays Emma Jung’s  “Animus and Anima”, a work, he said, still widely used by psychoanalysts.  C.G. Jung developed the idea of the Anima and Animus from his analytical practice and from examining his own psychology. Jung recognized, that there is an inferior feminine orientation in the male psyche which he named the Anima, from the Latin word for spirit, and an inferior masculine orientation in the female psyche which he called the Animus.

Beside the circle of women analysts and writers, like Jolande Jacobi, Aniela Jaffe, and Marie Louise Von Franz, five key women played an important role in Jung’s life and the generation of his theory. They are Jung’s mother, his cousin Hélène Preiswerk (the first patient), Sabina Spielrein (the first patient in analysis), Emma Jung (his wife) and Toni Wolff his long-time collaborator (and almost minor wife).  They were Medial Woman deeply embedded in Jung’s emotional life. By inductive intuition, he moved from specific observations to broader generalizations and theories. Jung’s women shaped his ideas by Memories, Dreams and Reflections, particularly Sabina Spielrein, his prototype of an Anima. Revelation of their psyches (Sabina and Toni began as patients), and Jung’s own during the crisis years gave way to The Red Book and theory. What crucially distinguishes Jung from much of the psychiatric practice surrounding him (especially Freud) was his refusal to regard spontaneous unconscious phenomena as pathological. Men by nature are more normally  dualistic predisposed  (formative ability and instinctive impulsiveness), thus their cultural achievements more determined by the intellect or spirit. There conscious attitude and coping with the reality are therefore usually based on the most differentiated function.  However, Jung certainly worked empiric with two functions,  “thinking”  and intuition.

According to Toni Wolff, women are inherently more conditioned by their soul, so her spirit and sexuality is rooted in the he psychical dimension. Their consciousness is therefore more comprehensive and holistic, but less defined.

Toni Wolff structured the Anima in an interesting quadruple of four basic archetypes. She said the names are not of much importance, but one could describe them as the mental forms of Mother (and wife), the Hetaira (companion, friend), the Amazon and the Medial Woman. They have in common with the psychological function types, that their axes are opposite (i.e, personal or impersonal relation), that means usually a form is the predominant, a second can join it, the third and fourth first are unconscious, and only later in of life one can made aware of and integrated with difficulty. In this respect, all four forms are detectable through the cultural history, and likely to be female archetypal structures. They are aspects of the male Anima and the structure scheme would be the following:

From Jung’s observations during the analysis of his patients, he recognized the Anima and Animus to be unconscious elements of the psyche which needed to be developed, or made conscious,  to maintain a  balanced connection to the world at large and first step of individuation. The Anima in a man, Jung maintained, is a mostly personal image of Woman within his psyche which each man carries with him through life. This image, or inner psychic reality, is a composition of a man’s experiences of femininity from childhood on, which is combined also with ancestral and archaic collective impressions of femininity. Jung maintained that it was the Anima which was responsible for a man becoming attracted to women, but only certain women, those who are close in character to this inner experience of femininity in the man’s psyche. In women, the Animus plays a similar role of defining the masculine side of a woman’s personality. Logically Emma Jung’s major contribution ( influenced by Toni Wolff) is her expansion on the concept of the Animus in her first essay written 1931.  The Anima essay, written in 1955, presents fewer personal views, and relies more on myth, legend, and fairy tale. As her numerous references to mythologies show, Animus and Anima can affect a man and woman in regards to each other and in spiritual quest. 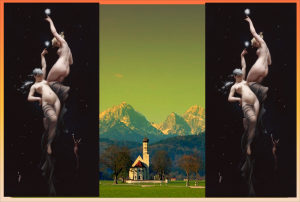 Moonlit Beauties. Luis Anima and Pantheism based on Ricardo Falero . US Public Domain.

On the way back, while driving during the incipient dusk in the rolling foot hills of the Bavarian Alps, we were both a bit tired after the dinner.  The conversation became simpler, but a little more personal. At one point he asked me about my marriage. “A real drag”  I said.  He responded : “How much of it you think comes from her menopause?  Somewhat cynical and blunt I quipped: Oh, a great part of it of course, I know that, but see I am a simple guy. If the sex is good – a woman can’t do hardly wrong, if the sex is bad – a woman can do little right. We had a very strong and good sexual relationship in our rocky enough marriage. Kind of glue. I know, that I have to transform my marriage, but all I could do was transferring to a decent truce and level of indifference.  We must have thought both, well consultants typically are immune to counseling, so we changed the subject.

I understood pretty clearly, that all men pick their wife (the wealthy men, or those with wealthy wives – their mistress) unconsciously after their Anima. Even Jung (especially Jung) seems  a primary example to me. Toni Wolff, by the way was his mistress after Sabina Spielrein, who in turn is considered as catalyst for his Anima theory. Both women were gifted psychiatrists. Well, by chance I re-read Tony Wolff’s structure of the Anima today. Oops, now I understand my problem on a meta-level. Of course, the Anima doesn’t change, but time alters women. So that’s the meaning of the saying: Women want always to change their man and men  want their woman not to change. Unfortunately, both things never happen.  Eros may be for many men, the primary Anima “function”, as well as sexuality the primary path of communication, keeping the synchronization (or trust level) up.  So yesterday had been a Jungian psychoanalytic session on the steering  wheel. It has not solved my problem (yet), but sure was a great talk.

Shortly before his own death, C.G. Jung  finished his autobiographical book erinnerungen-traeume-gedanken. In addition, to  the extremely popular book “Man and his symbols”,  his most important theories of analytical psychology are summarized in a simple way in collaboration with his students. Supposedly a chapter about Toni Wolff has been removed on request of his family nor is Sabina Spielrein mentioned. I highly recommend this book to anyone interested in the life of Jung and the events in his life that influenced his work (edited by Aniela Jaffe) :